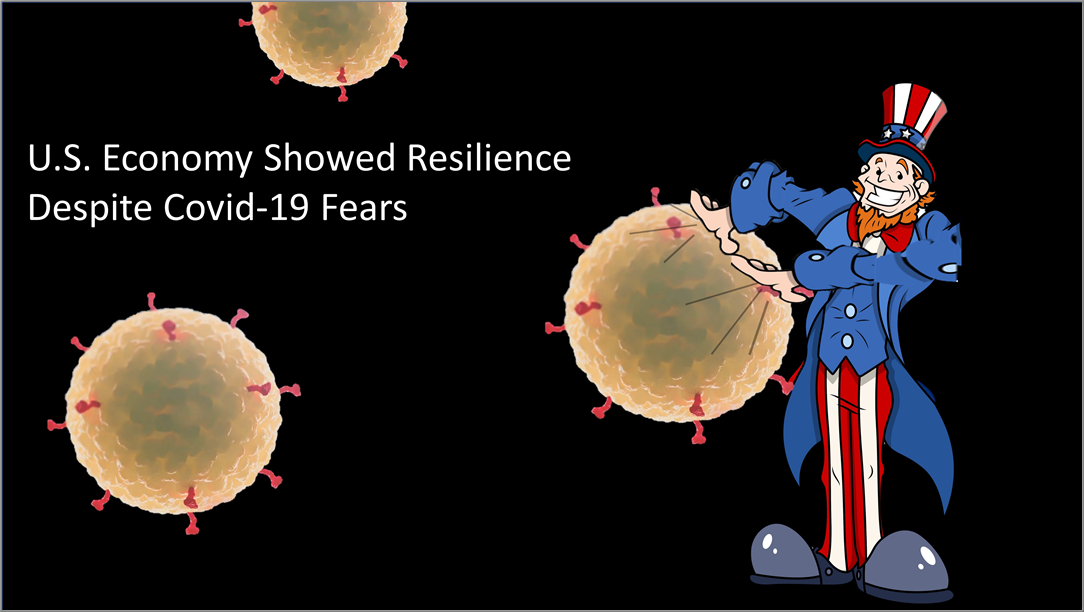 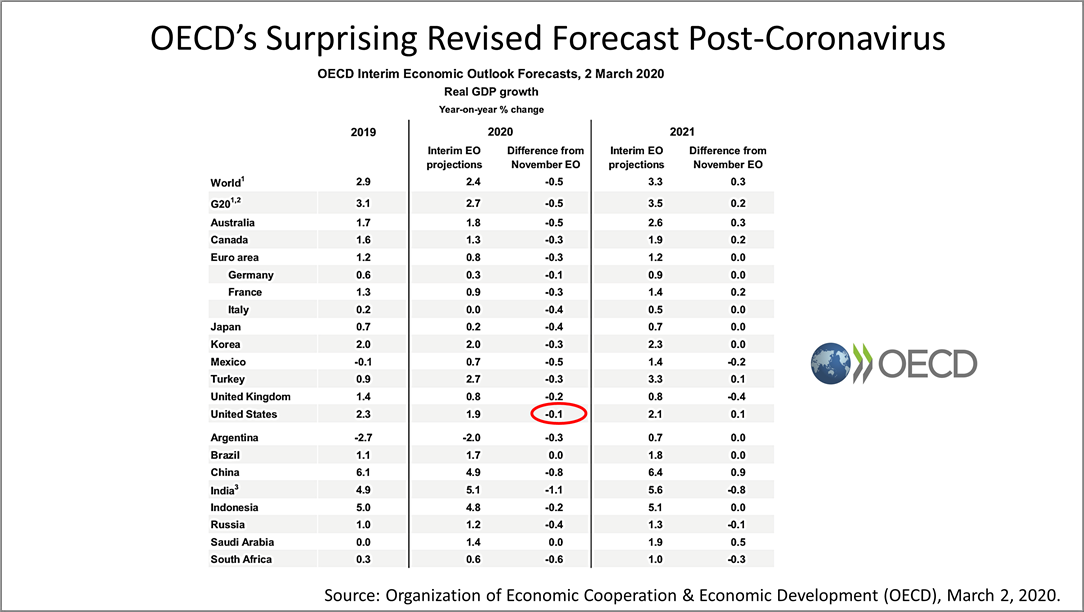 The Organization of Economic Cooperation & Development (OECD) normally updates its forecasts twice a year. Due to fears over the coronavirus, however, the alliance of the world's developed economies chose not to wait until May to issue its next forecast.

On March 2, in an interim forecast OECD made some surprising revisions to its forecast for global economic growth. 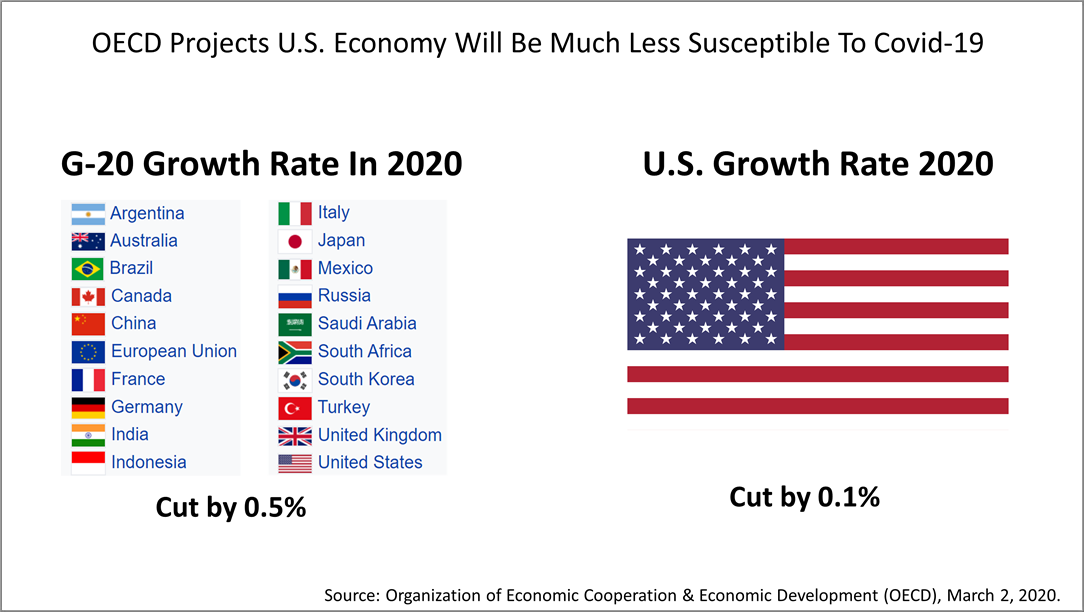 Worldwide, OECD projected a rate of growth in 2020 five-tenths of 1% lower than in November.

The OECD expects the U.S. to be able to fight off Covid-19's effects much better than than the G-20, as well, an alliance of the U.S., European Union and other major world economies. OECD reduced its expected growth rate in China by eight-tenths of 1%. 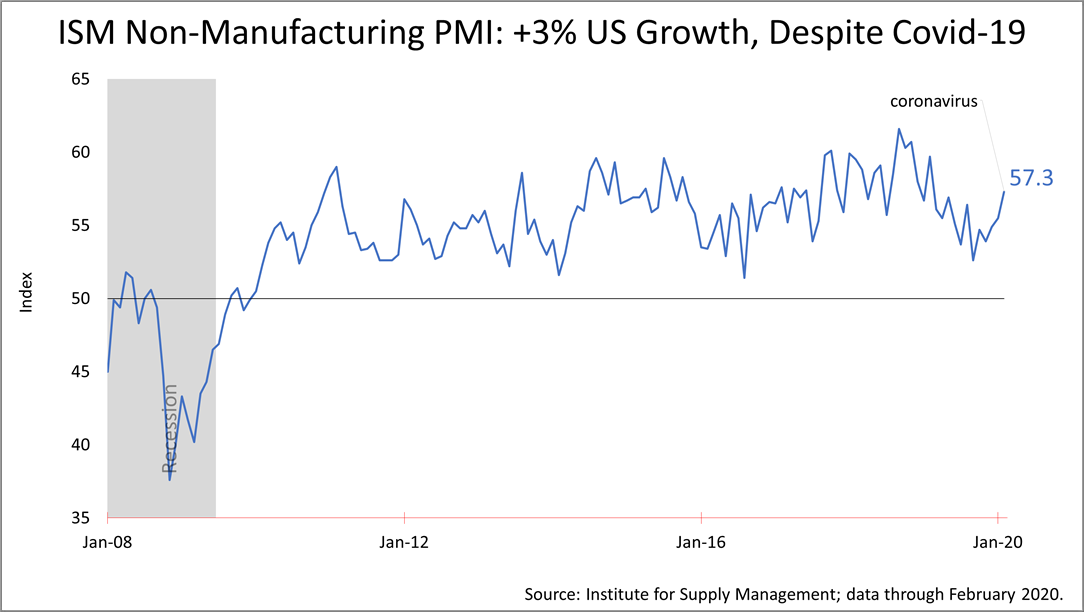 Meanwhile, the Institute of Supply Management (ISM), released its monthly survey of purchasing managers at big businesses and February's survey, which occurred after the outbreak. Surprisingly, it surged from 55.5 to 57.3.

The non-manufacturing index (NMI) accounts for 89% of U.S. economic activity and created 91% of the new non-farm jobs in the U.S., over the past decade, according to U.S. data.

ISM says a reading above 50 indicates that the non-manufacturing economy is generally expanding; below 50 indicates that it is generally contracting. An NMI® above 48.6, ISM says, generally indicates an expansion of the overall economy. The February figures from ISM show no sign of a recession mentality among corporate purchasing managers, despite the Covid-19 outbreak, which first hit headlines in mid-January.

"The past relationship between the NMI® and the overall economy indicates that the NMI® for February (57.3) corresponds to a 3% increase in real gross domestic product (GDP) on an annualized basis," said ISM. 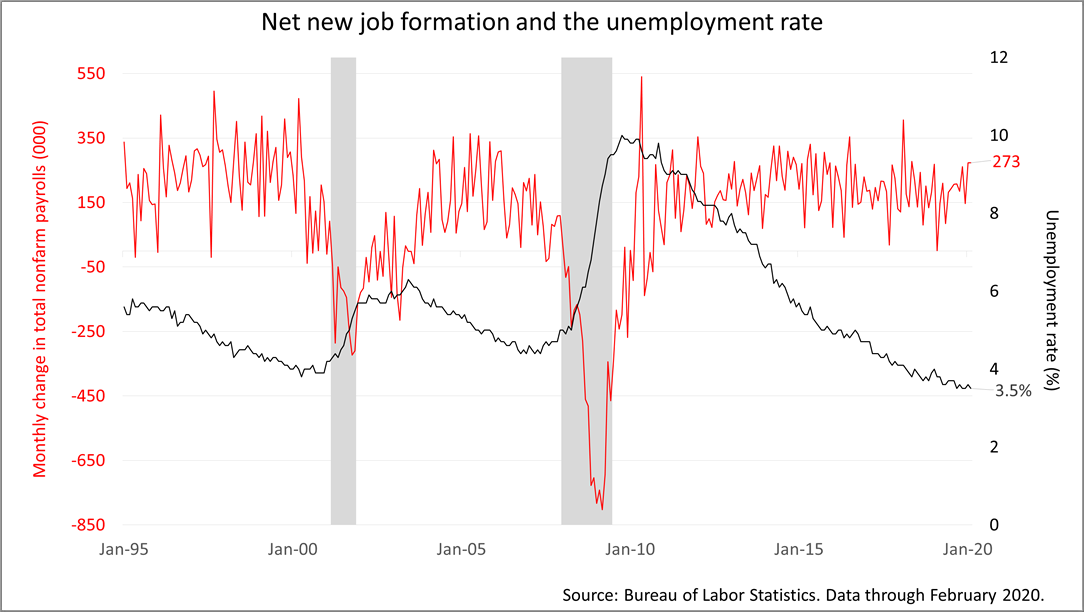 And then on Friday morning, the Bureau of Labor Statistics announced that 273,000 net new jobs were created in February. By February, fears of Covid-19 had hit the headlines, yet a surprisingly large number of jobs were created anyway.

Job formation slumped dramatically preceded the last two recessions. Nothing like that was happening February after the outbreak first hit the news. 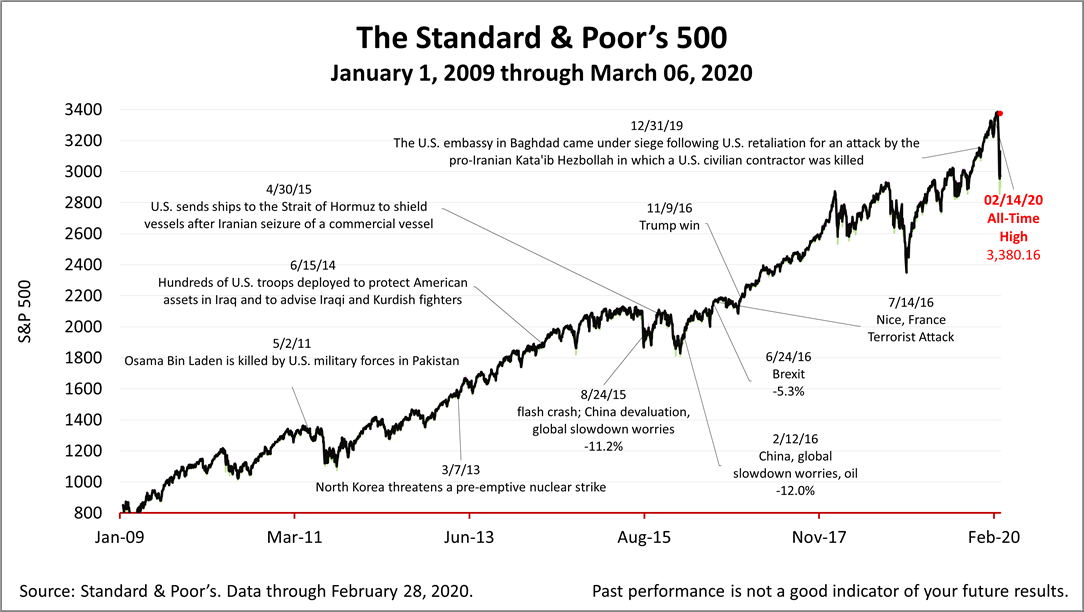 The Standard & Poor's 500 dropped 1.7% Friday, but eked out a small gain after a very volatile week. The index remained in correction territory, more than 10% from its recent peaks, closing at 2,972.37, despite surprisingly strong economic data reports.

The Standard & Poor's 500 (S&P 500) is an unmanaged group of securities considered to be representative of the stock market in general. It is a market-value weighted index with each stock's weight proportionate to its market value. Index returns do not include fees or expenses. Investing involves risk, including the loss of principal, and past performance is no guarantee of future results. The investment return and principal value of an investment will fluctuate so that an investor's shares, when redeemed, may be worth more or less than their original cost. Current performance may be lower or higher than the performance quoted.

Nothing contained herein is to be considered a solicitation, research material, an investment recommendation, or advice of any kind, and it is subject to change without notice. It does not take into account your investment objectives, financial situation, or particular needs. Product suitability must be independently determined for each individual investor.

This material represents an assessment of the market and economic environment at a specific point in time and is not intended to be a forecast of future events or a guarantee of future results. Forward-looking statements are subject to certain risks and uncertainties. Actual results, performance, or achievements may differ materially from those expressed or implied. Information is based on data gathered from what we believe are reliable sources. It is not guaranteed as to accuracy, does not purport to be complete, and is not intended to be used as a primary basis for investment decisions.